How to track your media campaigns with DataMa ?

With this article, you will be able to give clear and quick answers to these business questions. So the time that was previously wasted in searching for insights can be reallocated to the implementation of solutions that will improve your acquisition.

Let’s find out how DataMa breaks down the problem and identifies the key points of the analysis.

Take a step back in the analysis of campaigns

The improvement of acquisition campaigns revolves around three issues :

The three issues mentioned in the previous paragraph can be translated very well into a market equation. The latter allows us to break down a global problem into sub-indicators in order to gain in readability, to provide a precise analysis which will give in a few key points the priorities to work on.

By breaking it down by steps, we have in a very general way the expenses on the one hand, and the return on investment (ROAS) on the other hand, which we can itself break down into cost of exposure, conversion rate and average basket, as seen previously:

Gathering all these metrics in a single source is not an easy task. Indeed, they come from several sources, each of which may have different schema and level of aggregation:

With DataMa you have the possibility to combine these different data sources, either manually or via the DataMa Prep module.

Once combined in a single data stream (possibly via a DataMa Prep data flow), we can start the actual analysis.

By compiling the data in DataMa Compare, we obtain the variations of the different indicators in the form of a “waterfall”.

In the rest of this article, we will focus on understanding a variation in revenue generated by our campaigns between two months.

The results are as follows: 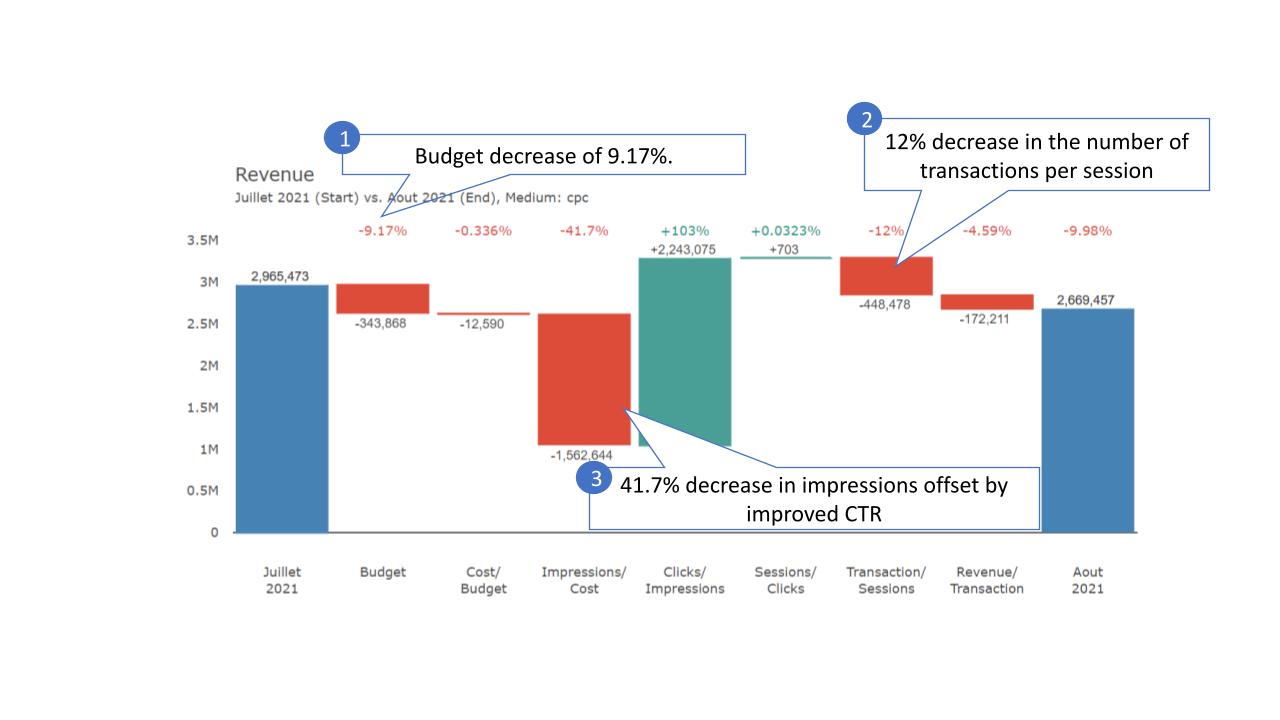 The revenue attributed to media campaigns decreased by 4% between July and August 2021. This change is explained through three effects:

This “mix effect” can simply be visualized on a matrix representing the evolution of the share of impressions and CTR :

With DataMa, we were able to perform a global analysis of all campaigns, whatever their source, and we were able to quickly identify the campaigns and sources that explained the variation of the indicators..

Once this follow-up is automated, it will be possible to do it on a regular basis (daily, weekly…). DataMa can even automatically generate emails or notifications on Slack for example, to keep you informed of the evolution of your campaigns!